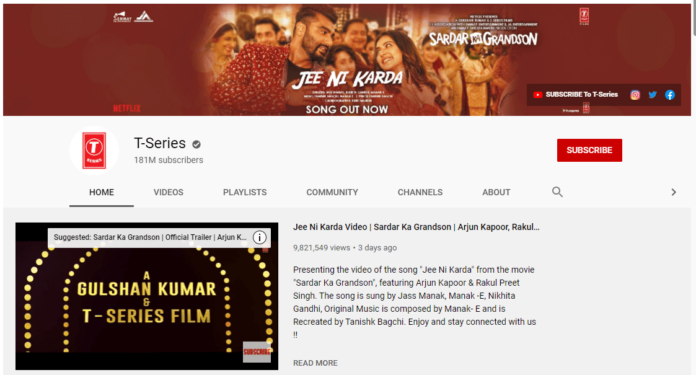 So, Let’s know about the top 5 popular youtube channels in 2021.

Kids Diana show is the 5th most popular youtube channel in 2021. Right now this channel has 77.6M subscribers and a total of 55,106,925,797 views. This channel was started on their journey by Elena on 12 May 2015, before the birth of her daughter Diana. Elena began this youtube channel to share the videos of Diana with her friends, relatives, and her family person.

This channel is the third most famous channel on youtube. It has over 109 million subscribers and right now, this channel got 27,198,490,037 views.

The creator of the PewdiePie channel is Kjellberg. This Youtube channel started its journey on youtube on 29 April 2010. This channel has a total of 27,193,574,720 views at present. This Youtube channel uploads podcasts, playing games, play games, and different kinds of entertainment-related videos. They also cooperate with other popular youtube video creators. The video and content uploaded by PewDiePie are always new, short and fresh, on the current topic.

Cocomelon- nursery Rhymes – is the 2nd most famous youtube channel in 2021. At present, this channel has 110 million subscribers.

T-Series Youtube channel was created on 13 March 2006. But they started making content in 2010. Right now, T-series got 180 million subscribers. This channel upload mainly entertainment-type videos. And T-series was founded by Gulshan Kumar on 11 July 1983 in Delhi, India.